Zenyatta to meet her match in Bernardini 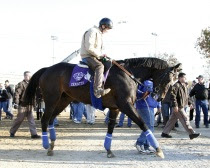 Jerry and Ann Moss have announced that their grand mare, 2010 Horse of the Year Zenyatta (by Street Cry), will be bred to A. P. Indy's son, Bernardini, whose first foals distinguished themselves as two-year-olds last year, with victories in five graded stakes on both sides of the Atlantic.

According to Darley, at whose Lexington, Kentucky farm he stands for a fee of $75,000, Bernardini is the first freshman sire to produce juvenile Grade I winners on both dirt and turf.  They were the talented filly, A  Z Warrior (out of Carson Jen, by Mr. Prospector's son, Carson City), who captured the Frizette Stakes-G1, and Biondetti (out of Lyphard's Delta, by Lyphard), who won the Gran Criteriuim-G1 in Italy.

Bernardini's other promising offspring include the Derby hopeful, To Honor and Serve (out of Pilfer, by Deputy Minister), who won a pair of Grade II stakes (the Remsen and the Nashua) in New York, and Theyskens' Theory (out of Heat Lightning, by Summer Squall), who captured the Chicester Observer Prestige Stakes-G3 in England.

Voted Eclipse Champion Three-Year-Old Colt in his sole season of racing, Bernardini won six of his eight starts that year, including the Preakness (in which favored Barbaro was injured), the Travers, and the Jockey Club Gold Cup, defeating older horses with what track announcer Tom Durkin described as "nonchalant brilliance."  He was second to Invasor in the Breeders' Cup Classic, after which he was retired to stud, with earnings of $3,060,480.

The match between Bernardini and Zenyatta will replicate the oft successful nick between A. P. Indy and mares by Mr. Prospector and his sons.  These lines have previously combined to produce Horse of the Year Mineshaft; Champion Two-Year-Old Filly Tempera; Canadian Champion Three-Year-Old Colt Eye of the Leopard (out of Eye of the Sphynx, by Smart Strike), and the Grade I stakes winners Tomisue's Delight, Little Belle, Sweet Symphony (out of Brandy Rose, by Distinctive Pro), Flashing (out of Morning Pride (Ire), by Zenyatta's grandsire, Machiavellian), Girolamo, A. P. Adventure (out of Nataliano, by Fappiano), and Jilbab (out of Headline (GB), by Machiavellian).

A foal by Bernardini out of Zenyatta will be inbred to Brilliant/Classic Chef-de-Race Mr. Prospector (5m x 4m), with a Dosage Profile heavily weighted toward classic influences:  3-6-13-0-0.  True Nicks rates the match as an A++, while the Werk Nick Rating is a bit lower, at B+.

In addition to the obvious genetic qualities that Bernardini brings to Zenyatta, it should be noted that he is also a beautifully balanced individual of good size (listed as 16.1-1/2 hands tall).  Zenyatta reportedly stands 17.2   Their foal will probably be a dark bay, like its parents, and will have the birthright to be a very good racehorse, indeed.
Posted by Maureen at 6:11 PM No comments:

Big Drama is back


Likely Sprint Champion Big Drama signaled that he's back in a big way yesterday, when he set a new track record for six furlongs in capturing the Grade III Mr. Prospector at Gulfstream.

The five-year-old dark bay horse was extremely impressive at every call, over an oval he clearly loves, and he pulled away from five rivals in the stretch to win wire-to-wire by four widening lengths, stopping the timer in 1:08.12, almost two-fifths of a second better than the mark set by Tiger in 2006.

Big Drama's sparkling performance in the Mr. Prospector proved that his breakout victory in last year's Breeders' Cup Sprint was no fluke, and that he is a deserving front runner for Eclipse Award honors in the Sprint category.  He was strong and fit and powerful, and it was great to see him come back to the races on such a triumphant note.

With yesterday's victory, Big Drama has now won 10 of his 17 lifetime starts and amassed earnings of $2,699,560 in the colors of his breeder, Harold Queen.  While his trainer, David Fawkes, has not announced the venue for Big Drama's next start, it's clear that he'll be mapping out a route to get Big Drama back to the Breeders' Cup winners' circle at Churchill Downs next November.

Big Drama is by far the classiest runner from Buckaroo's sprint specialist son, Montbrook, but he's not the only one who was produced from a Notebook mare.  The nick is also responsible for Super Derby-G1 winner, Outofthebox, and for Stopspendingmaria, who placed in last year's Schuylerville-G3 at Saratoga.   All are inbred to Horse of the Year and Intermediate/Classic Chef-de-Race Tom Fool, who is the great grandsire of Montbrook, and the sire of Notebook's second dam, the illustrious broodmare, Cap and Bells.

The plot thickens in the case of Big Drama, though, because his dam, the unraced Riveting Drama, brings another cross of Tom Fool into the mix.   But perhaps even more importantly, Riveting Drama is inbred to Ghazni, dam of the full siblings, Dunce (sire of her third dam, Betoken) and Cap and Bells (who also produced Irish 1000 Guineas-G1 winner, Lady Capulet, dam of top sire El Prado).

Though unraced, Riveting Drama has done nothing but good in the breeding shed.  In addition to Big Drama, she's produced six other winners, including Maltese Massive (by Yes It's True), a stakes winner of $560,883 in Japan; Little Drama (by Burning Roma), who broke his maiden in last year's Frank Gomez Memorial Stakes at Calder; Drama's Way (by Farma Way), a restricted stakes winner at Beulah Park; and Coffee Can (by Kissin Kris), a stakes-placed winner of $114,059.

Seventeen-year-old Riveting Drama is not currently in foal, according to an article in The Cleveland Plain Dealer published after Big Drama's victory in the Breeders' Cup Sprint.  Harold Queen said at the time that, "Riveting Drama has foaled seven horses that made it to the races, and all seven were winners.  Even if she never has another foal, she has a home right here for as long as I'm alive."

But we can't help but hope that Riveting Drama produces more offspring, and wonder whether Mr. Queen will send his prized mare back to Montbrook to produce a full sibling to Big Drama, or whether he might explore other intriguing possibilities, including sons of El Prado, to recreate the inbreeding to Cap and Bells.
Posted by Maureen at 2:23 PM No comments:


May Day Rose may have beaten only two rivals in Sunday's Santa Ysabel Stakes-G3, but her winning effort elevated the stock of her young sire, Rockport Harbor, when she was crowned as his first graded stakes winner.

The three-year-old bay filly never looked threatened at any point in the mile and a sixteenth contest over Santa Anita's new dirt surface, as she easily put away Bluegrass Cat's daughter, Bluegrass Chatter, and Scarlet Starlet, by up-and-coming A. P. Indy sire, Congrats.  May Day Rose has now won three of her five career starts and earned $184,555.  Even to a casual observer, she just exudes quality.

A registered Florida-bred born on Valentine's Day, May Day Rose was plucked from the OBS June Sale for $220,000 by trainer Bob Baffert, who now conditions her for Kaleem Shah.  She broke her maiden in a five-and-a-half-furlong maiden special weight test at Del Mar in her second start, over Labor Day weekend, and went on to capture the mile and a sixteenth Sharp Cat Stakes at Hollywood in early November.  Baffert stepped her right up into Grade I company in the Hollywood Starlet a month later, where she finished a respectable fourth to Turbulent Descent.

May Day Rose is the third winner from the unraced May Day Bluff (by Danzig's son, Pine Bluff), who previously produced May Day Vow (by Broken Vow), a stakes winner of $166,285 on the New York circuit.  Her third dam is the high-class Hoist the Flag mare, May Day Eighty, who won the Grade I Delaware Handicap.

A good-looking grey son of Unbridled's Song, Rockport Harbor raced with distinction in the colors of Rick Porter's Fox Hill Farm, and was considered to be an exciting Derby hopeful until his foot right hind foot was badly injured during the running of the nine-furlong Remsen-G2, which capped off his undefeated four-for-four two-year-old season.  As reported on the Farm's website, "Rocky won in a fantastic time (1:48.88) for the prestigious stakes and made his way to the winner's circle.  It was at this time that it was noticed that Rocky had been stepped on, as his right hind foot gushed blood."

Rockport Harbor was put away to allow his foot to heal, and didn't win again until he captured the Essex Handicap-G3 as a four-year-old.  He seemed on the way back to his old form, but subsequently re-injured the same foot in the Razorback Handicap-G3 a month later.  He was retired to Darley Stud, where he stood for $20,000 in 2007, the year May Day Rose was conceived.  Rockport Harbor's fee for 2011 is $12,500, which looks like a bargain now.

Interestingly, both of Rockport Harbor's first two stakes winners are out of mares by sons of Danzig.  His colt, Bear's Future, who won the seven-furlong Swynford Stakes at Woodbine, is a maternal grandson of Belong to Me.  Like May Day Rose, he is a complete outcross in his first five generations.
Posted by Maureen at 10:26 AM No comments:

The Keeneland January sale isn't scheduled to start until tomorrow, but the excitement came a bit early, when one of the mares who had been listed as "pregnant" arrived at the sales grounds with her five-day-old Unbridled's Song colt in tow.  Both mare and foal are doing great.


The robust bay colt is the first foal from the six-year-old Menifee mare, Highland Torree, a stakes winning earner of $205,922, who was bred to Unbridled's Song on February 17th, 2010.  She is catalogued as Hip 31 in the sale, and will be auctioned with her colt by her side, under the auspices of consignor Bedouin Bloodstock.

Highland Torree is a half-sister to six winners, including the good fillies Cape Town Lass (by Horse Chestnut (SAF)), who established the course record for a mile and a half on the turf at Keeneland (2:29.18) on April 9th, 2005, retiring with earnings of $215,142, and High Code (by Lost Code), a stakes-placed winner of $110,360.
Highland Torree's sire, Menifee, won or placed in 10 of his 11 starts, capturing the Grade I Haskell and Toyota Blue Grass, and placing in the Kentucky Derby, Preakness, and Travers.  He stood at Stone Farm in Kentucky through the 2006 breeding season, when he was exported to Korea, where he currently stands as the property of the Korea Racing Authority.  Menifee has sired the graded stakes-winning fillies Game Face and Just Jenda, and is the broodmare sire of stakes winners William's Kitten (by Kitten's Joy) andDancinginherdreams (by Tapit), who is undefeated in two career starts, including last year's Pocahontas Stakes-G2 for two-year-old fillies at Churchill Downs.
The eighth leading active sire by worldwide earnings in 2010, Unbridled's Song is the sire of Unrivaled Belle, who captured last year's Breeders' Cup Ladies Classic-G1, 2008 Champion Two-Year-Old Colt Midshipman, who enters stud this year, and crack sprinter Zensational, whose first foals arrive this season.  Unbridled's Song stands at Taylor Made Stallions in Kentucky for a fee of $100,000.
Highland Torree had previously been catalogued for sale in foal to Unbridled's Song at the 2009 Keeneland November and 2010 Keeneland January sales, but she subsequently aborted the foal she was carrying then.  With that in mind, her new colt's healthy arrival is cause for celebration, indeed.
Posted by Maureen at 7:41 PM No comments:

My pedigree posts on Examiner.com